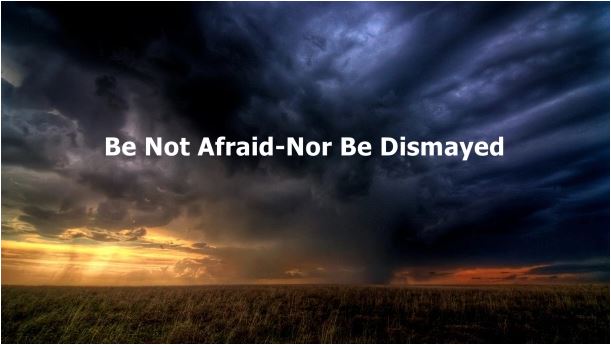 Years ago, while driving home in my car, I was pouring my heart out to God about the conditions of the world and how to deal with all the seeming chaos and threats.  It was then that He told me, “There is never a reason to fear.”  It was as if Jesus spoke again to the storm, “Peace, be still.”

From that day forward, I’ve used that mantra when fear raises its head, for I know that in Him, “There is never a reason for fear.”

As we move on with Joshua 1:9, I believe this LORD also spoke to Joshua in a similar manner.

Have I not commanded you?
Be strong and of good courage;
Do not be afraid, nor be dismayed,
for the Lord your God is with you
wherever you go.

Are you ready for some more treasure?  Our God has all the bases covered and all the provision we need at hand.  Let’s see what is beneath the surface of these words …words we often hear in the midst of a variety of circumstances:

Do not be AFRAID:

Afraid here is Strong’s #6206, it is a primitive root and it looks like this:

. It is pronounced ‘aw rats.’ and it means to dread, to harass, be afraid, feared terrified, oppress, prevail or shake terribly.

Let’s see what the letters tell us.  Reading from right to left:

Ayin70= Completion of time.  Means:  Eye, to See, Understand, Experience, or to be Seen, Window of the soul-good or bad (made of a Zayin and Yod—Word and Spirit)

Resh 200 = Insufficiency, Poverty. Picture: Head Means:Head, Chief, Beginning, Highest, Most Important, a Person, Human Reasoning vs. Obedience.  (When we allow human reasoning to be our master, our head, poverty of the Spirit results.)

Here is what God was telling Joshua when He told him not to be afraid:

(Ayin) I’ve given you the power to see and understand by the Word and the Spirit. (Resh) Don’t let human reasoning be your master.  Look to Me your Head. (Tzade) Continue to obey My commands of righteousness and you will have a Harvest.

Do you see it?  It’s a pep talk all the way through.  God is giving instruction out of His love for Joshua and Israel and it is fully backed by heaven’s army and God Himself.

After crossing the Jordan, the first obstacle they faced in the promised land was Jericho, the most fortified city in all the land.  And do you remember God’s instructions?

Joshua 6:1-5 “Now Jericho was securely shut up because of the children of Israel; none went out, and none came in. 2 And the Lord said to Joshua: ‘See! I have given Jericho into your hand, its king, and the mighty men of valor. 3 You shall march around the city, all you men of war; you shall go all around the city once. This you shall do six days. 4 And seven priests shall bear seven trumpets of rams’ horns before the ark. But the seventh day you shall march around the city seven times, and the priests shall blow the trumpets. 5 It shall come to pass, when they make a long blast with the ram’s horn, and when you hear the sound of the trumpet, that all the people shall shout with a great shout; then the wall of the city will fall down flat. And the people shall go up every man straight before him.'”

At first, even with these instructions, Joshua still appears to have military plans in mind, because he sends in spies to see what they are up against.  However, when it came right down to it, Joshua led the people of Israel in courage. I believe that Rahab’s words were a strong influence for their faith:
“I know that the Lord has given you the land, that the terror of you has fallen on us, and that all the inhabitants of the land are fainthearted because of you.” Joshua 2:9-10 NKJV

Ultimately they trusted God and obeyed His instructions to the letter in the face of impossible odds. God honored their obedience and did what He’d promised.

Let’s go on to the next word: DISMAYED

Dismayed is Strong’s #2865 and it is a primitive root.  It looks like this:

It is pronounced : ‘khaw-thath,’ and it means to prostrate, break down, either by violence, fear, or confusion. to abolish, make afraid, discourage, scare, or terrify.

(Doesn’t this sound a bit like what we’ve all been dealing with lately?)

Let’s look at the letters.

Here is what is hidden in God’s caution:

Remember, as long as you (Chet)  continue in My Word, stay in the Fenced area of My instructions, you will be Protected, because of (Tav) the Covenant I’ve made with you.  You belong to Me and I will keep you safe.

Now I am going to share with you a true story when this word was put to the test.

I believe most of you have heard about Heidi Baker.  Her life is filled with miracles.  She and her husband Rolland were sent by God to Mozambique and He told her to bring home all the orphans she found on the streets.  Iris Global currently feeds well over 14,000 children a day, as well as various members of many other communities. Its network of churches also numbers more than 10,000, including some 2,000 churches among the Makua people of northern Mozambique. Iris operates nine Bible schools, in addition to its primary schools and its school of missions in Pemba.

Now all of this looks AMAZING, but every single step in bringing this about has come with constant calls for courage in the face of lacking provision, great danger, and following God’s command to love.

Here is just one incident from Heidi Baker’s book, “Compelled By Love.”   It is available on Amazon:

“The Government thought we were all rebels trying to bring them down.  So one day they came and abruptly gave us 48 hours to completely leave our Children’s Center. I remember looking at the children and it seemed to be a hopeless situation. We were so poor at times, that we had to pray for a miracle to feed our 320 children.

I told the children to pray and forgive and to try to make peace with the government officials. We had very few resources and nearly nothing in our warehouse.

At 2:00 in the morning, they came and said they had a death warrant out for my life. So Rolland and I took our two children Elijah and Crystalyn and as many of the small children that we could fit into our two trucks.”

She said that one of the trucks was named Lazarus because they had to pray that it got raised from the dead to even get it down the street.

So they headed into Maputo that was 27 kilometers away from the Children’s Center.  They had to leave the rest of the children there because they couldn’t take anymore with them.

“The infuriated atheist government workers that had all matter of evil in them, threw rocks at the children in the camp.  They yelled at them, ‘You children who want food, if you will shut your mouths right now…you are not going to worship God, and if you worship Him, you will die of hunger…He does not exist.  If you read your Bible or go to pray, we are going to starve you to death.’

The children looked at these officials and they sang louder. Not one child left and the government people were so infuriated they changed their way of speaking and instead said promised them a home and food and education if they would confess their lack of belief in Christ and come with them to another center that they’d already overtaken.

In spite of this, every child said no, and every child stayed. They responded in the opposite spirit and spoke peace to them. The children knew that they were true sons and daughters of God. They knew that God was their Father and He would take care of them.

They all took off walking the 27 kilometers down the dirt road to Maputo. They were barefoot, but they all sang praises all the way to our office.

They came into our little office building that only had two toilets. The office space was lined wall to wall with people.  Their feet were bloody, their hearts were traumatized, they’d been ridiculed and told that God did not exist. But truly they were peacemakers.
They knew God was their Father and they overcame through love that never fails.

Even if their lives had been taken from them, they never would have stopped worshiping Jesus. They were children without shoes, not famous church leaders.  They were beaten and told that God did not exist, but they refused to back down on the gospel. They were told that they were just street children without intelligence, of no worth…but these children stood up to those leaders who spoke those lies and walked in peace. In the face of evil, they showed mercy.  In the face of hatred, they demonstrated Jesus’ kindness, and in the midst of persecution, they did not fight back, but they modeled what it means to be a peacemaker.  They truly were sons and daughters of God.”

More and more our world is being threatened by every sort of evil.  How will we respond?  What will we do?  Will we stay in faith?  Will we choose love?

May these words comfort and strengthen you is my prayer.

Do not be afraid, nor be dismayed:

I’ve given you the power to see and understand by the Word and the Spirit. Don’t let human reasoning be your master.  Look to Me your head. Continue to obey My commands of righteousness and you will have a harvest.

Remember, as long as you continue in My Word, stay in the fenced area of My instructions, you will be protected, because of the covenant I’ve made with you.  You belong to Me and I will keep you safe.

The words David chose, and the words God spoke in Psalm 91 reveal treasures of insight about who God is and about the enemy’s tactics. We cannot have lasting peace and freedom without knowing God and giving Him full reign in our lives. Nor is freedom possible without knowing how the enemy operates, and how we can shut him down. Hidden in the Hebrew text of this psalm both elements are revealed.

Here we uncover priceless nuggets of truth to help us live a triumphant life. There are also conversations I had with God through this process. I believe my journal notes, added to each chapter, will cause you to love and trust God more.

It is available on Amazon in Paperback and Kindle