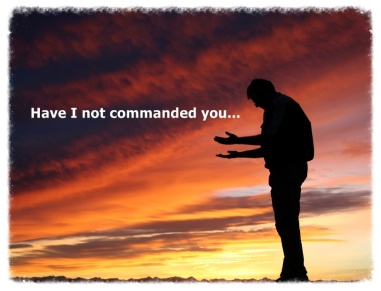 When I went to the LORD on January 1, after hearing  many prophecies from others but very little in advance on my own about 2016, I told Him: “Father, I truly want this to be a NEW year. No more holding back, no more unbelief or fear. Please help me to see Your plan and lay hold of Your power to accomplish every part.”

Then He said, “Courage.”

I asked Him, “Is this Your word over me or mine?”

Then He immediately said, “Joshua 1:9”

Joshua 1:9
Have I not commanded you?
Be strong and of good courage;
do not be afraid, nor be dismayed,
for the Lord your God is with you
wherever you go.

I felt I was to dig into this verse word by word and find it’s treasure and I spent the rest of the afternoon doing just that. In these next few posts I am going to share with you what I found, but first some background.

Then Moses went and spoke these words to all Israel. 2 And he said to them: “I am one hundred and twenty years old today. I can no longer go out and come in. Also the Lord has said to me, ‘You shall not cross over this Jordan.’ 3 The Lord your God Himself crosses over before you; He will destroy these nations from before you, and you shall dispossess them. Joshua himself crosses over before you, just as the Lord has said…. 5 The Lord will give these nations over to you, that you may do to them according to every commandment which I have commanded you.

6 Be strong and of good courage, do not fear nor be afraid of them; for the Lord your God, He is the One who goes with you. He will not leave you nor forsake you.”

7 Then Moses called Joshua and said to him in the sight of all Israel, “Be strong and of good courage, for you must go with this people to the land which the Lord has sworn to their fathers to give them, and you shall cause them to inherit it. 8 And the Lord, He is the One who goes before you. He will be with you, He will not leave you nor forsake you; do not fear nor be dismayed.”

Now, let’s see what God spoke to Joshua in Joshua 1:1-3 5-9 to see this in context with what was happening.

After the death of Moses the servant of the Lord, it came to pass that the Lord spoke to Joshua the son of Nun, Moses’ assistant, saying: 2 “Moses My servant is dead. Now therefore, arise, go over this Jordan, you and all this people, to the land which I am giving to them — the children of Israel.

3 Every place that the sole of your foot will tread upon I have given you, as I said to Moses. … This was God’s promise His covenant.

5 No man shall be able to stand before you all the days of your life; as I was with Moses, so I will be with you. I will not leave you nor forsake you.

6 Be strong and of good courage, for to this people you shall divide as an inheritance the land which I swore to their fathers to give them. — Again God brings up His covenant promises.

Then He gives Joshua a specific instruction, a COMMAND:

7 Only be strong and very courageous, that you may observe to do according to all the law which Moses My servant commanded you; do not turn from it to the right hand or to the left, that you may prosper wherever you go.

8 This Book of the Law shall not depart from your mouth, but you shall meditate in it day and night, that you may observe to do according to all that is written in it. For then you will make your way prosperous, and then you will have good success.

God’s Word was to ever be in his mouth, in his thoughts, and put into practice in his actions in order to reap the PROMISE.

Let’s look at the first word:

When I took this to Holy Spirit and asked Him to tell me what Commanded meant here, this was the result:

Have I not given you instructions for righteousness that connect you with Me? Those instructions will give you revelation and grace to walk out what is revealed.

What I discovered again as I did this study is that with every command or prophetic word God gives, there is provision hidden within it to fulfill the word. He tells us to do something and provides all we need to do it.

As I meditated on this scripture for several weeks, God  brought confirmation after confirmation through other prophets I’ve never met. He’s also called to mind many who walked these instructions out first hand and He compelled me to tell their stories.

The first story is about Mel Tari a missionary to Indonesia. He was preaching in one village and experiencing a great harvest. God told him and his team to go to another village that was a 2 days walk from where they were. They were in the middle of the rainy season and asked “Surely God, You don’t mean for us to go now.  Many are being saved and the momentum is rising daily.  Plus it is raining.  Can’t we wait for better weather?”

He made it clear to them that they were to go immediately. So they finally gathered those of their team who were willing and set out walking.

When they came near the village they were shocked to find that the creek that they normally crossed with ease, was now a raging river 300 yards across and 15-25’ deep.

Again they went to the Lord.  “Can’t we wait until the rain stops and the river diminishes? There isn’t any way to cross. We don’t even have a boat.  Please God.”

He emphatically told them that there were people waiting to hear the gospel in that village and they must go now.

They knew they’d heard from the Lord so after some more wrestling with Him back and forth, part of the group just walked into the water and started crossing. To their amazement none of them went into the water more than knee deep.

“Maybe we’ve misjudged the river,” they reasoned. When they got to the village they found that a man had died and the village was in an uproar of mourning.  While the team had never seen a person raised from the dead, they knew it was in God’s word. So the team prayed and commanded life to return to him and he was raised from the dead. Needless to say, the entire village came forward for salvation.  Their mourning turned to great celebration.

An added note: the rest of the team who watched the first group heard all of the shouts of joy and knew something good was happening.  They decided later that they would cross too. As they stepped into the water several were swept downstream and the rest had to go back.

Mel Tari says that when the first team crossed they were more focused on the assignment of reaching the village than they were on the miracle taking place. They wanted to do God’s will and see people receive the gospel. It was only later that they realized how miraculous it was.

So…we can see when faced with an impossible roadblock to God’s call, it was overcome by the power of God released to those willing to take courage, to trust, and obey in the timing of His command.

Has God told you to do something that sounds totally illogical and out of sync with your circumstances?  May you press into these next few posts and see what provision is available to you who hear and follow Him.

Shalom, until next time.

One thought on “Take Courage – Part 1”